Press enter to begin your search

Some Recollections of Phyllis Scott.

My father, Charles Russell, was the youngest of 16 children. He himself had 5 children, one of whom was my mother – born in The Bakery in 1900. The front room was the site of the bakery shop itself, and the back room was where the ovens were situated. The downstairs bedroom was the office.

My grandfather had the entire building, so that there was a door at the bottom of the stairs that led to the kitchen. Charles Russel passed The Bakery onto my aunt and uncle – Albert High. Albert High made all the cakes for the troops stationed in Stiffkey, Weybourne and Langham during the war. His brother Tim also had a bakery further down The High Street. Bread was delivered to six villages every day, the men not getting home until late at night.

I lived in The Bakery during World War 2. My bedroom is now the bathroom. Just inside the yard on the right is the well. I remember buckets of water being fetched all afternoon to make dough at night. Bakery Cottage was the wash house with a ‘copper’ and coal fire under it to do the washing. A lady came each Monday to do the washing. The first garage (114a) was the stable, and beyond that were the cart sheds. On the opposite side was the granary where all the flour was kept, and next to that, the cottage (now called Old Mealhouse Cottage), was the Barber’s Shop!

Have a good holiday! Phyllis Scott. 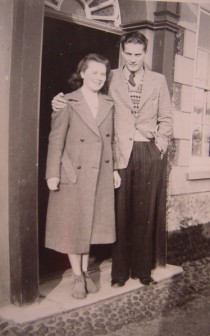 Phyllis Scott outside The Old Bakery 1939.